Vim is one of the oldest but still most popular text editors out there. It was released in 1991, and is still in active development. You can often find vim plugins for many IDE editors, and is installed by default on many Linux distributions.

The most important things to know about VIM

There are two 'modes' that are important. The normal mode is for moving your cursor around the text document. The insert is for actually inserting text and editing. (There are other modes, like visual (for making text selections) and command-line for entering commands - but for now you don't have to worry about these modes).

At first it takes a while to get used to switching between modes. After you get used to it, it will feel like second nature. When using normal text editors you will by mistake start using Vim commands (especially pressing the "Escape" key to 'exit' insert mode, even though you are in TextEdit/Notepad...

The most important Vim things to know:

How to save a document:

Press : (colon) this will bring up the command-line model. Then write w and hit enter.

How to quit vim: 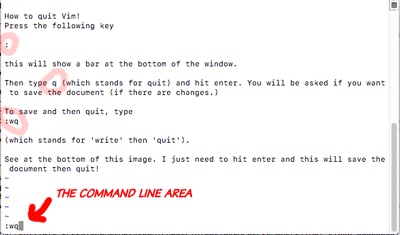 Press : to bring up the command-line mode (at the bottom of the window/screen). Then type q and hit enter.

How to save and quit at the same time:

Press : (to go into command-line mode) then write wq (which stands for 'write' + 'quit') and hit enter.

After using Vim for a while these will become second nature (and I guarantee you'll try and do them in other apps...)

How to go from 'normal' mode into 'insert' mode

If you are in normal mode (which is used for moving the cursor around the text document) and you want to start editing text then you will want to go into 'insert' mode.

Press i (for insert) to switch to insert mode. Then you can write text at the cursors position.

Other common options for switching into insert mode (while in normal mode):

How to move around the document using the keyboard

If you are in normal mode then you can move around the document very easily.

Those are the simple ways of moving around a document. You should be able to get used to them quite quickly.

To be quicker at moving around documents it can be useful to move between words or blocks of text:

You can also combine almost any command with a number, to repeat it a certain number of times.

If you are in insert mode then you have to use the arrow keys to move around. But I recommend exiting insert mode (press escape) and go into normal mode, then move around using the instructions above.

More Blog Posts in this series:

I'm a late 20's web developer, specialising in Laravel, but work with other PHP frameworks and associated technologies (such as JS). I mostly write about PHP here. Contact me here. Need to hire or work with a contract PHP software developer in London, UK (or freelance)? Contact me and check my availability.

How to sort lines of text from within vim (super easy!)

Beginners Guide to Tabs in Vim

Vimattack: How to get someone's database credentials while they are editing config files on a live server

Why You Should Never Host Your Own Videos, And What 3rd Party Video Hosting Services Are The Best To Use

Apps, software and services that I use

Beginners Guide to Tabs in Vim

How to create a new MySQL (MariaDB) Database, user, and grant it privileges

Welcome to my web dev blog! I'm a 29 year old guy from London, UK. I've loved programming since I was around 9 years old, and have run websites since being an early teenager.

For the last 12 or so years I've been working full time as a backend web developer (mostly with PHP). This is my site where I write up about various web development topics (including Laravel stuff, some JS articles, Vim tips, server stuff, etc.)

I've got a few public Laravel packages here too.